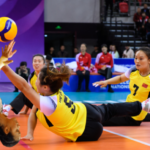 Over the decades, the discipline has evolved and has been renamed “volleyball” because of the peculiarity of the “volley” in the game.

Worldwide, there are 260 million volleyball players and the International Volleyball Federation has 220 affiliated countries. In Quebec, more than 10,000 young people play volleyball in the school system, from elementary school to university. Also, more than 2000 athletes play in clubs and compete in competitions organized by Volleyball Quebec. Finally, tens of thousands of fans of all ages play in recreational leagues throughout the province.

Volleyball is also known in many variations; beach volleyball, sitting volleyball, new volleyball, etc. For children and preteens, the mini volley is preferred because the size of the field, the types of contacts, the number of players in the field and the equipment used are adapted.

In terms of physical appearance, volleyball is a complete sport that strengthens both the upper and lower body and improves its cardio-respiratory capabilities.

The practice of volleyball allows you to develop several skills such as coordination, power, and precision. This sport requires strategy, concentration, and team cohesion. Tactics must be developed and technical movements must be mastered to defeat the adversary. The dynamism, explosiveness, and speed of play at parties are attractive for both the player and the spectator.

Volleyball can be practiced at all ages. With no physical contact or violence, this is an activity of choice to avoid shocks and injuries. Requiring little equipment, it is an inexpensive sport to practice.

Dependency between teammates is a special feature of this game as a volleyball player cannot touch the ball twice in a row. Thus, unlike other team sports, a volleyball star cannot direct all the action leading to a point.

Popular with friends on the beach or in the gym, volleyball is a sport where technical mastery is essential to optimize the game phases. Cuff, smash or service, a little tour of horizons of the essential gestures of the discipline.

This gesture is the basic touch of Volleyball. The pass consists of touching the ball in front of you, with the pulp of the fingers distributed on both sides of the ball. The movement of the arms serves essentially to dampen the contact with the ball, optimize its control, and ensure the direction of the pass. The range and power of the pass come from the supports, so the thrust of the legs at the moment of contact. Remember that prolonged contact with the ball is prohibited for volleyball. It’s the only team sport with this feature. The pass being more precise than the headline, it is preferable when receiving the floating services.

This gesture is preferred when the ball is low or fast (receiving service, defense on a smash). The contact area is at the inside of the forearms. These should be located lower than the shoulders, forming an angle with the bust. The push is done at the level of the legs while keeping the angle between the bust and the arms. The cuff is used to transmit the ball to the passer. It is important to place straight arms to obtain a direct cuff (which will pass in a straight line on the other side of the net).

The touch of attack is a very technical gesture, the ball being hit by the palm of the player, while the latter is in suspension. There are different types of attacks:

– the powerful attack, which tries to force against, that is to say, to prevent any recovery after this one. It can also cause the block-out, that is to say, hit the hands of the controller to be deflected out of the field.

– The fake or lobed attack is to simulate a powerful smash and to dampen his gesture at the last moment, to lob the block and surprise the defense. The ball is not hit but pushed with three fingers. The momentum is exactly the same as that of the smash, and the gesture makes it possible to place the ball precisely, aiming for a hole. The goal is to take speed defense, which expects a frank attack.

The block (or cons)

This defensive movement is carried out in extension, the player putting his two arms in opposition to the net, and therefore to the opposing attack. It aims to prevent the ball from passing in his camp while dropping the ball in the opponent’s court. When a player makes a counter and the ball falls less than one meter behind the net, the opponent, this against is called a “square” is the best way to counter the service. Volleyball shoes are most important for playing the game.

The server must stand behind the bottom line of his field without stepping on it. He chooses his depth but must remain within the limits of the ground in width. He must hit the ball with one hand. Before the shot, the ball must be thrown or dropped (it cannot be held). If the ball touches the net, but passes to the other side, the service is validated.

There are several services:

– The “service spoon”
Usually used by beginners, the service spoon is to take the ball with the left hand (for a right-handed), to stretch this arm forward at the height of the pool, toss the ball slightly in height and hit it from below with the right hand to make it “fly” forward.

– The floating service
For this service, the player keeps his feet on the ground, throws his ball high and hits it like a smash, but does not fold his hand completely. The gesture is stopped at the precise moment of impact. The player can also perform a counterweight with his body to increase the power of the strike. The ball will follow a floating trajectory making it uncertain where exactly the ball is supposed to touch the ground. This floating therefore puts the receiver in difficulty.

– The smashed service
The smashed service is the service most frequently performed by professionals. The player must stand near the edge of the field, throw his ball high and perform a short run to hit his ball during the suspension.